Marilyn Monroe’s One Night Stand With Elvis Presely…Oh My Heavens!

Posted at 23:27h in Hollywood of Yore by Francesca Cruz

No images of the actual encounter exist…

And oh what a pity that is, but according to Alanna Nash the author of “Baby, Let’s Play House” who interviewed Byron Raphael (the assistant to Colonel Parker and later a William Morris agent) the meeting between Elvis and Marilyn took place in the summer of 1960

Marilyn Monroe as she appeared in the summer of 1960

“Elvis had never seen Marilyn, then in the early summer of 1960 the two most explosive and legendary sex symbols of their era sized each other up in the street in front of a soundstage at Twentieth Century Fox and came away unnerved…”

Marilyn at the time was reeling from her fractious marriage to Arthur Miller while having an affair on the set of “Let’s Make Love” with her costar Yves Montand. Elvis on the other hand was set to start principal photography on Flaming Star. 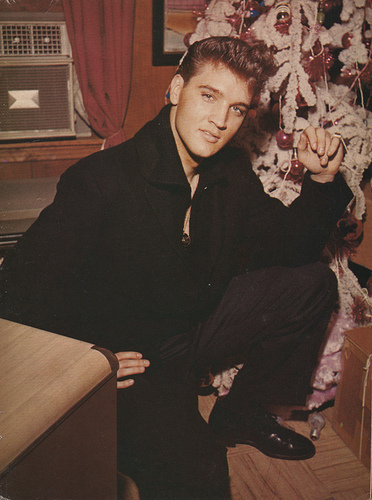 Elvis how he looked in 1960 just returning from military service, notice his natural dishwater blonde hair

The Memphis Mafia (his gang of hangers-on) convinced Elvis to go to stage 23 and ask Marilyn out… “Elvis approached her in his usual self-deprecating way, his soft baritone edged in southern charm. ‘Hello, my name is Elvis Presley. How are you, Miss Monroe?'”

As if any introduction was necessary… (a wink and a sigh)

“Marilyn smiled in a way that said she liked the way Elvis filled out his Oxford trousers.” In Nash’s book Raphael proceeds to acknowledge that once Monroe noticed all the hangers-on she declined the invitation, but in another interview with Playboy magazine Raphael recants his story and describes the following… 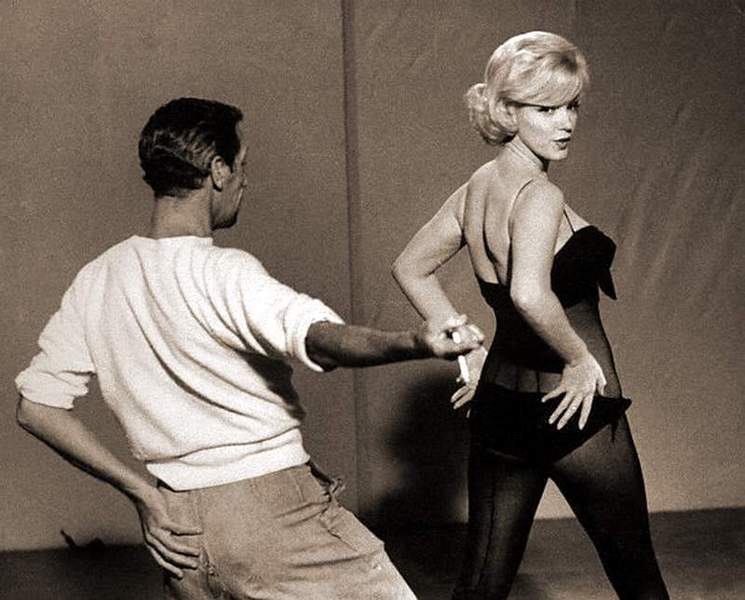 “Elvis asked her if she would like to come to a party that he was giving the next night. She looked at the guys and said ‘I’m sorry. I can’t, but thank-you’ and kind of dashed away. That’s where I left the Playboy story. I was going to do another story, another Playboy story about the date that Elvis and Marilyn actually had. That’s really what I want to talk to you about, because they did have probably the most glorious one-night stand of all time, because that’s what it turned out to be. It turned out to be a one-night stand where I delivered Marilyn. I picked her up from Shelly Winters’ apartment. I remember it so well. Marilyn was married at the time. She was married to Arthur Miller, the playwright. Rumors were starting to flare that she was starting to have an affair with Yves Montand, the French actor who was gonna be her co-star in Let’s Make Love. So, the marriage with Arthur Miller was not going well. But, as marriages go in those days, in New York, you had to be very careful, because there was fault divorces, rather than no-fault divorces. Adultery could not only mean money, but tremendous scandal. I picked Marilyn up ’cause I got a call from Elvis and I thought that was the end of the Marilyn thing, that day at 20th Century Fox. He said ‘Pick up Marilyn. I said Really?’ I remember almost distinctly; and this is fifty years ago or more. The address was in the 9000 block of Doheny Drive, right off Sunset Blvd. I went to the door about 7 PM. Shelly Winters opened the door… she hadn’t become that heavy-set character actress of A Place In The Sun. Still a very attractive young women. When she opened the door, I said ‘Hello, I’m Byron Raphael from the William Morris Agency. I’m here to pick up Miss Monroe.’ She yelled ‘Marilyn, there’s a man from the Morris office here. Do you know anything about it?’ Then there came Marilyn Monroe. It was a different Marilyn than I had seen at the set. All of a sudden she was extraordinarily beautiful. ”

“Elvis had a big suite, so I could lay down on the couch. I think by this time it was 8:30 PM, 9 PM. We’d been out at the studio all day. I was tired. About 8:30, 9 o’clock, Marilyn and Elvis walked out of the bedroom stark naked. I was married, but, I had never seen a woman totally nude that I didn’t know, much less being Marilyn. Elvis ran around a lot in boxers. But, the two of them absolutely stark naked…her figure was so magnificent. I had never seen a woman that beautiful. I don’t know if in those days she had breast implants or if that was just the way she was…but she was perfect. And so was Elvis. They didn’t realize I was there. All of a sudden Elvis noticed I was there and Marilyn just laughed. Elvis said ‘Byron, I’ll call you.’ And I knew it was time for me to go. So, I went back home and I waited. I didn’t go to sleep ’til 2 or 3 o’clock, but he never called. So, either he sent Marilyn home in a cab or maybe Shelley came to pick her up, I don’t know what happened.”

Can you imagine those two incredible creatures making love? I know this might come off as terribly shallow but I would pay good money to see those images or better yet a video.

And so there you have it. For a brief moment (more like a night) those two supernovas shared “La petite mort”, or at least I hope they did.